Patent claims for inventions predicated on the existence of synergistic action of mixtures are common, yet often the evidence provided on which the assertion of synergy is based is not as compelling as it may first appear. Here we provide guidance to both the professional representative and the patent examiner on points to consider when submitting or assessing evidence for synergy, and make recommendations as to how the credibility of the process could be improved.

“Plausibility” has made a firm entry into the patent law vocabulary. Although it seems common sense that a patent applicant needs to show in a credible manner that the invention actually works over the claimed range, the patent examiner seems to be faced with a (legal) problem to translate his doubts about the plausibility of the invention into a substantiated reason to refuse certain claims. Especially in the field of so-called synergistic mixtures, there often seems to be a disproportionality between what has been credibly demonstrated and the extent of the exclusivity granted to the patent applicant. Although case law seems to be shifting towards a more plausible position, some perspectives on data analysis could be of use to patent examiners.

This led to the authors making a presentation to European patent examiners in November 2016 on issues pertinent to the assessment of patent claims for inventions predicated on the existence of synergistic action. This article is essentially a transcript of what was presented.

Many scientific papers have been published on methods for determining the presence of synergistic action. However, this article does not seek to explore the different methodologies in detail. Instead, the intention is to provide guidance to both the professional representative and the patent examiner on points to consider when submitting or assessing evidence for synergy. Although the article has been assembled in the context of mixtures of agrochemicals, the content has broader applicability.

There is some debate as to the precise definition of synergy. A common definition, to be found, for example in the Collins English Dictionary and adopted either explicitly or implicitly in a number of patent cases, is that synergy occurs when the combined action of two or more agents is greater than the sum of their individual effects. (In the context of agrochemical research, the term “agent” would normally refer to a particular substance at a particular dose.) But use of the word “sum” is too rigid and leads to obvious problems e.g. if agent A alone has 60% effect and agent B alone has 70% effect then according to this definition the predicted effect of A+B would be 130%, which is clearly nonsense in most situations. Moreover, while the idea that the predicted effect of a mixture should be equal to the sum of the individual effects might seem intuitively reasonable, the reality is that this would only be the case under a very particular set of circumstances that would rarely, if ever, occur in practice.

A more realistic and scientifically justifiable definition is as follows: synergy is said to occur when the combined action of two or more agents is greater than could have been predicted based on the performance of the agents when used alone.

In our opinion, synergy will have been demonstrated if it has been convincingly shown that the performance of a mixture is indeed better than could justifiably have been predicted. This gives rise to two challenges: (i) how to calculate the predicted response, and (ii) how to interpret the difference between observed and predicted responses in the knowledge that both are subject to the effects of random variation.

Deciding How the Predicted Response should be Calculated

There is no single method of deriving predicted responses that is appropriate in all cases. Strictly, the choice of method should be dictated by the researcher’s understanding of how the agents in question would be expected to act together in the absence of any synergistic effect. In practice, however, the choice of method often appears to be somewhat arbitrary, with no reference to mode of action (MOA). In fact, many interested parties appear to be unaware that there is a choice at all or appear not to understand the circumstances under which each method is appropriate.

While this concept is most easily demonstrated by assuming S1 and S2 are the same substance, exactly the same principle applies to any mixture in which one substance essentially behaves like a serial dilution of the other, such that either can be substituted for the other in fixed proportion depending on the relative activities of the substances in question. This might be the case when mixing substances which have the same, or similar, MOA’s for example. 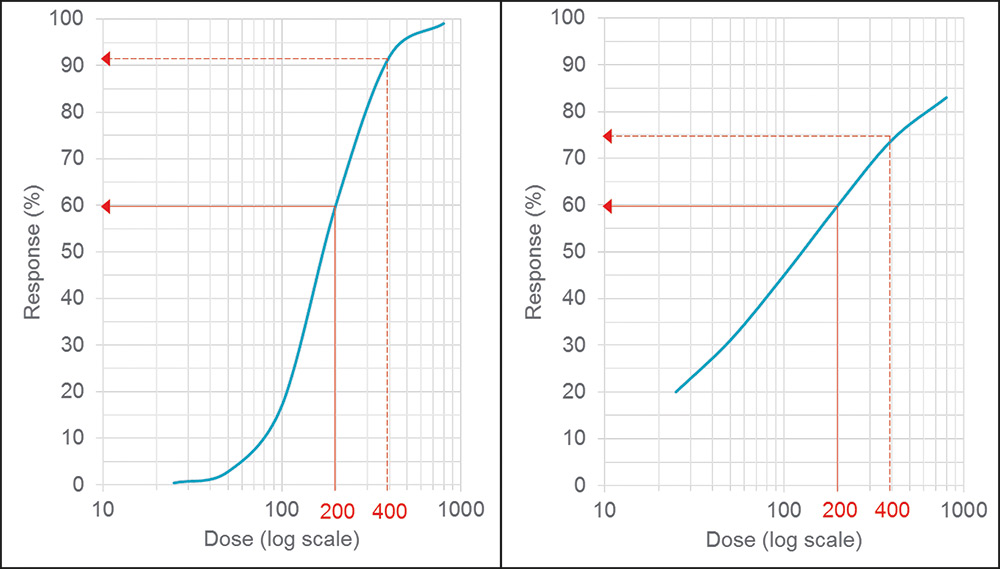 To be clear, this is not a criticism of the Colby method per se. The Colby method (which is also variously attributed to Abbott, Bliss, Limpel and others) is, in fact, entirely appropriate in cases where, in the absence of any synergistic effect, the agents are expected to act independently. The problem is that this method is simply not appropriate in other circumstances. In cases where it is reasonable to assume that the MOA of the agents in question are so similar that, in the absence of any synergistic effect, one agent will behave exactly like a simple dilution of the other, an entirely different approach to calculating predicted responses is called for – one that is based on dose response modelling using, for example, methodology advocated by Wadley (and others).

The problem of choosing an appropriate method of calculating predicted responses is further exacerbated by the fact that, often, mixture studies are conducted at a time when the researcher may be unaware of the respective MOA of each agent. In these circumstances it might be impossible to identify which method of calculating predicted responses is most appropriate.

All biological experiments are impacted by the effects of natural variation. A key consequence of this is that, even if a mixture was neither synergistic nor antagonistic, the observed response would not be expected to be identical to the corresponding (appropriately derived) predicted response. Instead, observed and predicted responses would be expected to differ to some extent, according to the laws of random variation. In practice, this means that there is a 50% chance that the observed response to any given mixture will be numerically greater than its predicted response simply due to random variation alone. Of course, in such cases the magnitude of the difference between observed and predicted responses may be relatively small but this does not necessarily preclude an assertion of synergy from being made, or a patent predicated on such an assertion from being granted.

Disclosures of synergy rarely include enough detail of the experimental design and levels of underlying variation to allow the reader (even one with high level statistical expertise) to estimate what size of deviation between observed and predicted responses could be expected simply due to random variation alone. Moreover, given all of the factors that can vary between one dataset and another such as the nature of the recorded response and the level of replication, it is impossible to come up with a “rule of thumb” in this respect. But having said this, in the absence of convincing evidence to the contrary, it is reasonable to assume that the size of deviation attributable to random variation alone could be quite large, and assertions of synergy based on relatively small differences between observed and predicted responses should be interpreted with this in mind. This concern applies regardless of the method of estimating predicted responses.

It could be argued that any assertions of synergy should be backed up with an appropriate statistical test – one that assesses the probability of obtaining a difference between observed and predicted responses of an equal or greater magnitude to that presented simply due to random variation alone. In practice, however, standard statistical tests are rarely appropriate for synergy studies, and deriving a bespoke test that takes proper account of all relevant sources of random variation is in most cases far from straightforward. Also, the structure of the statistical test itself would need to vary from one case to another depending on issues such as the precise experimental design and the nature of the response. While some scientific papers relating to synergy include statistical tests, no particular test is widely accepted by the scientific community. Moreover, at least some of the tests discussed in the published literature have subsequently been shown to be flawed. There are exceptions. For example, if two agents are to be mixed and it is known that only one shows activity when used alone, the question can be simplified to “is A+B better than A alone”, in which case it is possible to design a study in such a way that the resulting data can be analysed using standard statistical methodology. (Although some would argue that the concept of synergy does not apply in cases where only one agent shows activity when used alone.) But in general, reliance on a statistical test does not seem to be a viable way forward.

Often, the design of a synergy study will include an entire matrix of different treatments (e.g. five doses of substance X and four doses of substance Y plus all possible combinations). Under this scenario, if there was in reality no synergy and no antagonism whatsoever, we would expect around half the mixtures to have an observed response that is numerically greater than their respective predicted response, and half to have an observed response that is numerically less. If this were indeed the case then by looking at the entire set of results it should be apparent that the deviations between observed and predicted responses are no different to what we might reasonably expect by chance. But if the applicant chose to submit only those results which showed the biggest deviation in the positive direction, the evidence for there being a synergistic response would appear more compelling than was actually the case. Such “cherry-picking” of results is therefore misleading and disclosure of all relevant results should be encouraged.

Table 1a. Results as might be submitted in support of a synergy claim

Table 1b. Full Results. Responses are in percentages. For mixture treatments, table shows observed response, predicted response (in italics) and difference between observed and predicted. Cherry-picked results corresponding to Table 1a shown in bold font.

How Independent are the Results?

In cases where multiple results have been submitted, it is important to take into account the extent to which different results are truly independent from one another. In many synergy studies, the data generated for any given agent when used alone contributes to the calculation of predicted responses for a number of different mixtures, and so if the response to a particular agent happens to be somewhat lower than expected this could result in all of the corresponding mixtures appearing to be better than predicted. An example of this is shown in Table 2. 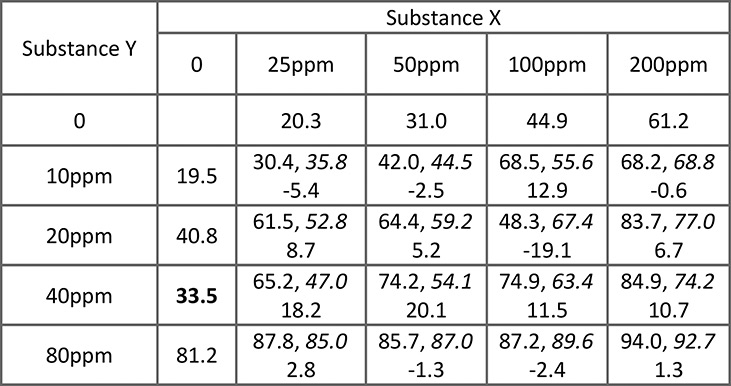 Table 2. Responses are in percentages. For mixture treatments, table shows observed response, predicted response (in italics) and difference between observed and predicted. Note response for substance Y alone at 40ppm is much lower than would be expected based on the results of the other three doses, resulting in inaccurate predicted responses which in turn leads to the false impression that all four mixtures involving substance Y at 40ppm are synergistic.

Currently, the standard of patent claims which cover an invention predicated on the synergistic action of mixtures of agrochemicals is of variable scientific quality, which in itself is not surprising given there are no guidelines in this respect. Moreover, the complexities of the science are such that it can be difficult for the examiner to critically assess the data and arguments provided by the applicant in support of those claims. Together, these factors undermine the credibility of the process. Although the complexities will not go away, the credibility of the process could be improved if the following three recommendations were adhered to: