Ideas for reform of the EPC - the inaugural lecture of Prof Cees Mulder (Professor at the University of Maastricht,NL) 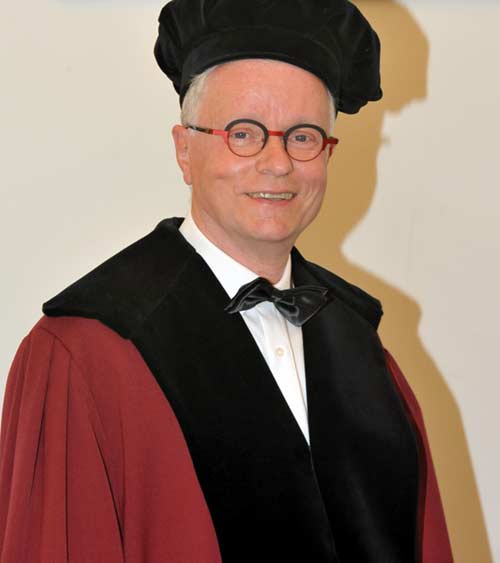 In 2001 four patent attorneys left the Philips patent department to set up a new firm that would give training courses for the EQE in addition to the more conventional private practice work. One of them was Cees Mulder, who had been engaged in the internal course for the EQE together with Derk Visser. Whom of the many colleagues within the Philips patent department, including myself, had foreseen that Cees would end up as a professor in patent law?

Looking backwards, the career path of Cees may seem as a clear road from spin-wave theory in physics via Philips research and the patent department into the procedures of the PCT and the EPC to become professor. But as we know too well from our practice, with hindsight nearly everything seems obvious. Whatever, Cees certainly deserves his appointment as a professor that follows his engagement in EQE trainings, other courses, several books and also his contribution to the law and practice.

In his inaugural lecture of 18 May this year, Mulder provides a review on the various patent harmonization treaties. He starts with the Paris Convention and then continues with the eight harmonization treaties in the period of 50 years since 1960. His overview provides a good background for all of us that are almost daily users of PCT and EPC, understand the relevance of TRIPS and may have heard of other treaties such as the Strasbourg Convention, the Community Patent and the Patent Law Treaty. As Cees explains, do not worry about all of these and do not think that you should follow another training (for instance from Cees). These other treaties did not make it into reality. Some are historically relevant, others may be forgotten. The one that would deserve more attention or even a revival is the Patent Harmonisation Treaty. As Mulder explains, it would have been a major breakthrough for worldwide patent harmonization. Unfortunately, it was not signed in the end. The USA withdraw from the negotiations thereon, and rather put its agenda forward within WTO to arrive at TRIPS.

All the initiatives for patent harmonization since TRIPS did not succeed, for which reason Mulder gave his lecture as title "The Patent Deadlock". Is that an issue? Yes, says Mulder, as there is no harmonization in relation to vital substantial issues such as novelty, inventive step and the protection for traditional knowledge, genetic resources and folklore. And then he puts the ball at the EPO, as in his view, Europe traditionally leads harmonization and the EPO had adopted such a strict approach that it effectively blocks further harmonization. Where traditionally the USA opposed against further harmonization in view of its first-to-invent system, this has been abandoned in the meanwhile.

Mulder suggests the introduction of a grace period of 12 months for inventors, the removal of computer programs from the list of non-patentable subject matter and add the possibility to review substantive issues to the petition for review by the Enlarged Board. And this all will be addressed in a proposal for revision of the EPC that he intends to elaborate as a professor. I am looking forward to his proposal and hope that it will also fit the needs of the start ups and other innovative SMEs.

The inaugural lecture of Prof Dr Mulder (in English) can be found at: https://cris.maastrichtuniversity.nl/portal/en/publications/the-patent-deadlock(49dd9bd0-81f1-4eb8-8c50-cb3c9817b270).html