President Leyder opened the meeting at 9 am and welcomed all participants. Apologies for absence were noted, a test vote was conducted and scrutineers were appointed.

2/ Introduction of the Executive Director

President Leyder said a few words to introduce Ms. Tatjana Lissak who was recently appointed as Executive Director (see epi Information 1/21) and took her position on 1st February 2021. Ms. Lissak also shortly introduced herself: she is an economist by training, has 20 years of professional experience including experience as Executive Director in a subsidiary of the German automotive association.

3/ Adoption of the agenda

The agenda was adopted with two changes, namely the addition of two motions presented by the Dutch delegation. The first motion dealt with the availability, for Council members, of the audit report on the functioning of the Secretariat. The second motion dealt with the role of the Secretary General and the strategic plan of the Institute. Details on these motions are given below.

The minutes of the last Council meeting (C89) were approved. The document listing the action points arising from previous meetings and their status (completed or still on-going) was noted.

5/ Report of the President and Vice-Presidents

President Leyder referred to his report in the accumulated file, which included the activity of both Vice-Presidents. President Leyder also indicated that since the last Council meeting he was informed of three new complaints filed with the Disciplinary Committee - this information being not mentioned in his report.

President Leyder also presented the draft strategic plan of epi which revolves around the following goals:

Midway through the presentation, Mr. Mulder (NL) raised the concern that the latest version of the By-Laws (BL) was, according to him, incorrect. Mr. Moutard (FR), the Chair of the By-Laws Committee (BLC), explained the sequence of preparation of the different versions of the BL. After a round of exchanges, President Leyder drew the conclusion that there seems to be no up-to-date consolidated version of the BL. The BLC will look into this matter.

Back to the presentation various topics were discussed in particular on the creation of a European Patent Administrator Certificate (EPAC) in collaboration with the EPO, on the grace period (Council members were reminded that epi has taken the position that we are against however we could agree if part of a harmonised package), and on diversity (one Council member reported that some US companies no longer work with patent firms which do not implement diversity measures).

6/ Second motion of the Dutch delegation

President Leyder, Vice-President Vogelsang-Wenke and Treasurer Thomsen pointed out that data within the report were protected under German law and GDPR. The Presidium asked the Dutch delegation to withdraw their motion otherwise the Presidium would recommend Council to deny it. There were several exchanges of view between Council members and Presidium members on this topic.

The vote on an amended motion took place after the lunch break (to allow the Dutch delegation to amend their motion in the light of the discussion, then to prepare and display the full text of the motion in all 3 official languages). The motion was approved (58 in favour, 53 against, 12 abstentions).

7/ Report of the Deputy Secretary General

The Deputy Secretary General, Ms. Augustyniak, referred to her report in the accumulated file, and briefly highlighted some key achievements in the context of the pandemic, such as the organization of epi webinars and of EQE preparation courses). The Deputy Secretary General then presented the 2020 annual report, the content and format of which was substantially changed compared to the report of previous years - with the help of a communication agency. The 2020 annual report was approved (114 in favour, 1 against, 5 abstentions). The Deputy Secretary General also confirmed that the next Council meeting (C91) would be held by videoconference on 13th November 2021, and that the following Council meeting (C92) would normally take place in Glasgow on 7th May 2022.

8/ First motion of the Dutch delegation

The Annual Financial Report for 2020 has been prepared and reviewed by the external and internal auditors and was discussed with the epi-Finances Committee. epi concluded 2020 with a positive result of +237 k€. The budget as originally approved by Council in C87 was amended in C89 in order to take already into account the envisaged substantial changes that could be predicted because of the pandemic. The amended Budget C89 has a planned surplus of 150 k€ whereas the original budget C87 had a planned deficit of -91 k€.
The Treasurer, Mr; Thomsen, highlighted the fact that Due to the canceled EQE2020, there were almost no new members and the overall income from annual subscription decreased, compared to 2019 by almost 52 k€. Income from educational events also drastically went down from 212 K€ in 2019 to 75 k€ in 2020. Income from epi studentship was higher than expected, mostly due to the fact that the number of candidates for the 2021 EQE increased.
Representation expenses (roughly -143 k€) included (i) sending to all members a hard copy of issue 4/20 of epi Information, and (ii) signing a contract with an external Communication agency with the aim to assist the Editorial Committee in their efforts to come up with a long-term communication plan and at the same time try to improve the quality of ongoing communication activities and tools.

11/ Report of the epi-Finances Committee

The Chair of the epi-Finances Committee, Mr. Quintelier, referred to his report in the accumulated file, in which notably the annual financial report 2020 and the cautious approach adopted by the Treasurer for the running 2021 budget was commended.

12/ Report of the Internal Auditors

The internal auditors, Mr. Conan and Mr. Kley, referred to their report in the accumulated file. The auditors noted that this year’s process for preparing and finalizing the Audit was again not satisfactory caused by delays and by repeated necessary corrections on the requested data entries respectively bookings. The internal auditors made some suggestions on bookkeeping, procurement and compliance processes to ensure that invoices, orders and financial claims are practically and timely addressed.

The auditors finally noted that the annual financial accounts comply with the legal German regulation (HGB) and requested that Council agree in one vote:

13/ Release of members of the Board, and in particular the Treasurer, from liability

The release was adopted by Council (104 in favour, 3 against, 11 abstentions).

14/ Report of the Treasurer

a) The Treasurer, Mr. Thomsen, presented a snapshot of the financial situation at the end of April 21. The situation seems to be in line with what was expected. The income side should normally be boosted in Q3 or Q4 when all candidates having passed the EQE enter the list of professional representatives and pay their subscription fee.

b) The Treasurer then provided an update on a number of topics and on-going projects, including:

c) The Treasurer presented a proposal for amendments of the Rules Governing the Annual Subscription (CoD 5.1.1) and Council Decision C70 regarding treatments of double payments (CoD 5.1.6). The proposal was:

No financial impact was expected as there are only a handful of cases concerned per year. The amended Rules will become effective from 2022 onwards.

Council approved the proposal (109 in favour, 3 against, 7 abstentions).

15/ Presentation from the Executive Director

The Executive Director, Ms. Lissak, (i) shared insights on the current operating model of epi, and (ii) presented an action plan including objectives and projects.
Concerning (i) the Executive Director detailed all the activities that are currently performed within the Secretariat and the complexity of the operation model due notably to the interaction between the support to the business units (Presidium, Board, Committees) and the many IT tools used to provide said support and to run the functioning of the Institute.
Concerning (ii) the Executive Director mentioned that processes and workflows need to be defined so that effectiveness and efficiency is achieved through process compliance, defined responsibilities, clear accountabilities, good cooperation and communication flow, and transparency. The projects for the period 2021-2022 are centered on organisational performance (new accounting system, IT assessment, compliance rules) whereas organisational health will be dealt with starting in 2022 (a RACI matrix will be implemented - RACI stands for Responsible/Accountable/Consulted/Informed).

Full and/or substitute members of the following Committees were elected (in that order) for the remainder of the 3 year-term that will end in the fall of 2023: Professional Conduct Committee, Litigation Committee, Committee on Biotechnological Inventions, European Patent Practice Committee (main committee), Professional Education Committee, By-Laws Committee.
The detailed and up-to-date composition of these Committees is available on the epi website (https://patentepi.org/en/epi-bodies/epi-committees).

a) The Chair of the Professional Education Committee (PEC), Ms. Gwilt, reported on e-EQE that took place in March and presented the main points of the discussion paper on a possible format for the new, digitalized, EQE (this paper is available on the epi website). Since the “new” e-EQE will not be implemented until 2024, the PEC intends to build on the experience of this year’s examination to discuss with the EPO what improvements can be made, e.g. about the format of the papers and the platform/browser used, for next year and for 2023.

There was a discussion within Council on whether a larger consultation within epi and interested circles would be needed. The German delegation tabled a motion in this respect, requesting that a conference be organized within a short period of time to discuss the future of the EQE. This motion was approved (70 in favour, 36 against, 8 abstentions).

b) The Chair of the IP Commercialization Committee, Mr. Stöckle, presented draft comments epi intends to file on the European Commission’s “Intellectual Property Action Plan to support the EU’s recovery and resilience” (also known as the “IP Action Plan”). The presentation triggered many comments and suggestions that will be considered and; where appropriate, taken on board in a further draft.

c) The Chair of the Committee on EPO Finances, Mr. Boff, presented what he called a “non-paper” on the possible structural reform to fees, for discussion with the EPO. The aims of the possible reform include a simplification of fee structure, steering applicant behaviour through fee incentives/disincentives, aligning the structure of Euro-direct and (Euro)-PCT fees, improving the cost coverage of certain products and services, support for certain categories of applicants.

d) The Chair of the Studentship Admission Committee, Mr. Mercer, reported that 65 new applications had been approved since November 2020.

e) The Chair of the European Patent Practice Committee, Mr. Mercer, reported that the activity of the Committee essentially focused the past months on the G1/21 referral. Two amicus curiae briefs were prepared and filed on behalf of epi, one on the suspected partiality of members of the Enlarged Board of Appeal in its original composition, the other on the substance itself.

f) The Chair of the Professional Conduct Committee, Mr. Checcacci, reported that a final version of the proposed changes to the Code of Conduct should be ready for decision at the next Council meeting. The changes concern, amongst other things, UPC-related activities (see also below).

g) The Chair of the Litigation Committee, Mr. Thomsen, reported that discussions were still ongoing with the EPO about the amended version of the Code of Conduct in order to make it ready for a potential future UPC.

18/ Review of decisions and actions and closing of meeting

The Deputy Secretary General listed all decisions made and actions taken during the meeting. President Leyder then thanked the participants and the support team before closing the meeting at 5:45pm. Break-out rooms were opened so that the participants could continue discussing various topics on an informal basis. 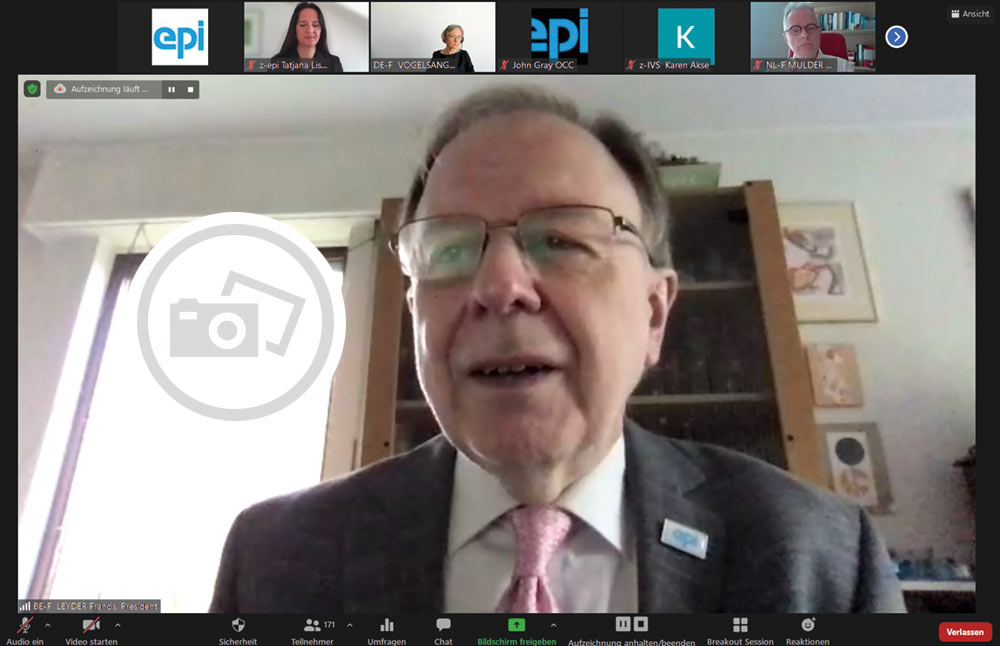