President Leyder opened the meeting at 9.10 am and welcomed all participants. A test vote was conducted and scrutineers were appointed.

2/ Adoption of the agenda

The agenda was adopted with changes, namely

4/ Confirmation of the list of nominations for Committees by-election

The Secretary General, Ms. Sirakova, confirmed the name of members having applied for a position in the By-Laws Committee and in the Electoral Committee.

The minutes of the last Council meeting (C91) were approved. The document listing the action points arising from previous meetings and their status was noted.

6/ Report of the President and Vice-Presidents

President Leyder referred to his report in the accumulated file, which included the activity of both Vice-Presidents. President Leyder also indicated that he was disappointed that a chamber of the Disciplinary Committee issued a decision after the time limit imparted to do so.

7/ Report of the Secretary General

8/ Report from the Executive Director

The Executive Director, Ms. Lissak, reported progress in the Secretariat, notably on accounting, cybersecurity and the organisational chart. Ms. Lissak informed Council that further steps would focus on accounting, IT projects and RACI matrices (RACI stands for Responsible/Accountable/Consulted/Informed).

The 2021 annual report was presented by the Secretary General and Mr Névant (Chair of the Editorial Committee). Mr Névant mentioned that the report had a format and layout comparable to those of the 2020 report, and thanked all those having contributed to the preparation of the report, in particular Ms. Liebig from the Secretariat. Mr Névant also indicated that the report would be illustrated with photographs taken during the Council meeting. The annual report was approved by Council.

The Annual Financial Report for 2021 was prepared and reviewed by the external and auditors and was discussed with the epi-Finances Committee. epi concluded 2020 with a positive result of +135 kEUR (whereas the budget had a planned deficit of -197 kEUR).

The Treasurer, Mr. Thomsen, noted that since the 2020 EQE had to be cancelled and the first eEQE took place in 2021, epi welcomed more than 1000 new members in 2021, which was in line with the budget. In addition, subscription in epi studentship was above expectations.

Mr. Thomsen explained that as the pandemic was ongoing in 2021, epi ontinued its practice to offer most educational webinars for free to members and students.  Some educational events could also be organized with a participation fee, that led to an income of +172 kEUR; this income covered the overall external expenses of -170 kEUR for organizing the educational webinars.

On the expenses side, spending on Council, Board, Presidium and Committee meetings was much lower than expected because no physical meeting took place and both Council meetings took place out virtually. Other usual expense lines included salaries, IT and finance & law.

11/ Report of the epi-Finances Committee

The Chair, Mr. Quintelier, referred to his report in the accumulated file, in which notably:

12/ Report of the Auditors

The auditors, Messrs Conan and Kley, referred to their report and annexes in the accumulated file. The auditors were overall happy with the handling of the assessment of cost centres and the dunning process, but were concerned with the increase in the extra working hours in 2021. They made suggestions to manage overtime and to improve the payroll process, and again proposed to introduce a double signature system. The auditors also tabled motions concerning (i) the release of the Treasurer from liability for the accounting year 2021 and (ii) possible amendments of the By-Laws.

A round of exchanges followed between the Presidium, the auditors and the Chair of the By-Laws Committee. A vote on the motions then ensued.

Motion 1
Does Council agree in one vote:

Council approved the motion (105 in favour, 3 against, 7 abstentions).

Motion 2
Does Council agree that an amendment of the By-Laws of the Institute is prepared being ready for vote at the Council Meeting C93, which amendment has the following objectives:

13/ Release of the members of the Board from liability

Council released the members of the Board, and in particular the Treasurer, from liability (107 in favour, 4 against, 4 abstentions).

The Treasurer, Mr. Thomsen, presented a snapshot of the financial situation at the beginning of April 2022. The situation (income and expenses) seems to be in line with what was expected. There are however a number of uncertainties due especially to the high level of inflation in Europe and the effect of the ongoing war in Ukraine. An increase in energy costs and travel expenses is already noticeable.

The Treasurer also mentioned that the educational activities will focus this year on:

The Treasurer further mentioned that it is planned to increase self-service on the website.

Mr. Michael Liebetanz (CH) was elected as full member of the By-Laws Committee. Mr. Peter Barrett (GB), Mr. Markus Müller (CH) and Mr. Árni Vilhjálmsson (IS) were elected as members of the Electoral Committee. Congratulations to them!

As a reminder, the detailed and up-to-date composition of all Committees is available on the epi website (https://patentepi.org/en/epi-bodies/epi-committees) and at the end of each issue of this journal.

The amendment presented by Mr. Chris Mercer (Chair of the Studentship Admission Committee) was aimed at filling an unintended gap. At present, If an epi Student completely passes the EQE, their Studentship is automatically terminated. However, they do not automatically become full epi members. They need to apply to the EPO for entry onto the list and then the EPO needs to carry out the procedure for entering them onto the list. As we have noticed recently, the EPO can take some time to enter an applicant on the list. In the time between passing the EQE completely and being entered on the list, they are neither epi Students nor full members. In order to ensure that, at all times, they are part of epi, an amendment of Rule 8(1) and Rule 13 was proposed.Council approved the amendment (108 in favour, 1 against, 4 abstentions).

In anticipation of the elections to Committees in the fall next year, the Secretary General and the Deputy Secretary General worked in liaison with the By-Laws Committee (as decided by Council during C91) to propose an amendment of Decision 3.3.4 which governs the election of Committee members. As a result of the amendment, Decision 3.3.5 would have to be deleted. A new Committee, called the Committees Election Committee, would be in charge of the election of Committee members. The remit of such a Committee would need to be defined in its terms of reference (ToR). In addition, the ToR of the Nominations Committee would need to be amended to take into account the remit of the new Committee.

An updated version of the Collection of Decisions will be available on the website at the end of June or the beginning of July 2022.

There is high pressure on Europe to adopt measures such as e.g. a grace period. In this respect a survey has been conducted by the EPO to collect the feedback of interested parties including NPOs. This topic was last addressed by Council in 2013.

During the meeting Mr. Brown (Chair of the Harmonisation Committee) reviewed the pros and cons of the various systems and proposals on the table (Rule 55 EPC, IT3IT3 stands for Industry Trilateral proposal, AIPPI proposal, FICPI proposal). A lively discussion ensued and the following motions were eventually voted on.

Motion 1
epi is opposed to any kind of grace period.
Council voted in favour of this motion (68 in favour, 32 against, 13 abstentions).

Motion 2
However, epi could consider a grace period as a safety net as part of a harmonised system.
Council voted in favour of this motion (88 in favour, 18 against, 5 abstentions).

Mr. Reijns (member of the EQE Examination Board and of the joint EPO-epi Working Group on eEQE, both on behalf of epi) presented the proposed new concept of the EQE. The Working Group has analysed the specific competences required for each paper, to identify recurring and/or common features within the various papers. Model papers have been prepared by epi and EPO members, which are suitable for an online examination and which meet the current high standard. A goal is to test different types of knowledge which are expected from a professional representative, with increasing complexity over time reflecting a gradual development of competences: 2 papers could be sat after about 12 months experience, another set of 2 papers after 18/24 months, and a final set of 2 papers after 24/36 months.

Detailed information on the new EQE is available at https://www.epo.org/learning/eqe/new-eqe.html.

It is possible to test the model papers until 15 July 2022 using the Wiseflow platform.

An amendment to the Code of Conduct (CoC) was proposed to include the fact that professional representatives are bound to the CoC when representing their clients before jurisdictions including the EPO and the UPC.

Council approved the amendment (106 in favour, 2 against, 7 abstentions).

The revised CoC will normally be published in the June edition of the EPO Official Journal.

A proposal to adopt a policy on diversity and inclusion (D&I) was presented by the Working Group on D&I. A draft proposal had been sent to Council members in advance of the meeting, and the comments collected were taken into account to revise the text intended to be adopted. The Working Group also requested permission to continue its work until at least C93.

22/ Request from the Dutch delegation concerning the situation in Ukraine

The Dutch delegation proposed to inform European patent attorneys how to deal with Russian and Belarusian patents and patent applications in view of the economic sanctions imposed on these countries. A draft recommendation was prepared by Mr. Checcacci (Chair of the Professional Conduct Committee), who could unfortunately not join the meeting.

Council amended the proposal and adopted the recommendation (98 in favour, 3 against, 7 abstentions).

The text of the recommendation is available on the epi website (https://patentepi.org/r/info-2202-09).

Mr. Thomsen (Chair of the Litigation Committee) briefly summarised what happened since the beginning of the year (entry into force of the Protocol on Provisional Application, thus of certain parts of the UPC Agreement, on 19 January 2022; inaugural meeting of the Administrative Committee on 22 February 2022; Advisory Committee established on 24 February 2022). Mr. Thomsen also reminded the audience that (i) the sunrise period (3-4 months) will be triggered by the deposit of the instrument of ratification of Germany, (ii) the UPC will become operational on the 1st day of the 4th month after Germany’s ratification, and (iii) it will be possible for European Patent Attorneys with additional qualification to register as full representative under Art. 48(2) UPCA.

The Chair of that Committee, Mr. Mercer, referred to his report in the accumulated file, and presented a motion requesting Council to approve a statement in relation to Rule 132 EPC, to the effect that:

25/ Review of decisions and actions and closing of meeting

The Secretary General listed all decisions made and actions taken during the meeting. President Leyder then thanked the participants and the support team before closing the meeting at 7 pm. 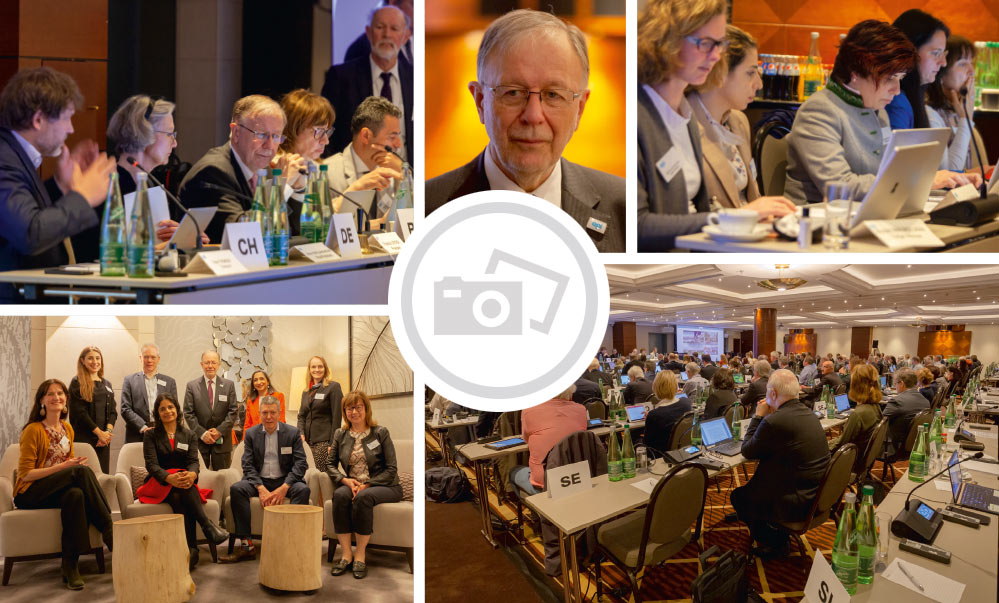