The President opened the meeting at 8.40am. The timetable and revised agenda were approved. The English version of the minutes of the previous meeting, C82 in Munich, was amended at line 365 concerning Professional Liability Insurance in all 38 Contracting States to read" Mr. Boff was against the epi assuming legal liability". With this and other minor amendments the minutes of C82 were approved.

One delegate suggested that Council Minutes should only be provided in English, with translations into German and Frensh being provided later. Mr. Casalonga requested that the minutes be provided in the three official languages of the epi ab initio. Council decided to defer a decision on this to a later meeting.

This being the meeting at which epi Committees were populated from those members of the Institute who had put themselves forward for election to Committees, the President reminded Council that where there was more than one candidate for a single Committee place it is the Council, not a Member State , which decides on the successful candidate.

The Secretary General (SG) reported that it is now possible to access documents by date in the library section of the Institute website (as had been requested in the 97th Board meeting).

The previously circulated reports of the President, Vice -Presidents, and Secretary General were approved; The SG in addition informed Council orally that: (i) the next meeting, C84 in Valetta, Malta, would be the occasion to celebrate the 40th anniversary of the Institute, for which it was proposed to produce a commemorative booklet;

(ii) the Institute website was up and running and had the approval of members; and

The Treasurer then spoke to his previously circulated report; in summary:

(iii) the legal status of the Institute as an international organisation having its seat in Munich needed to be established. To further this aim, Council agreed that a working group comprised of the Treasurer and members from the By-Laws Committee (BLC) should be set up to detail the main objectives and tasks of the Institute as set out in the Founding Regulation;

(iv) Revision of R154 EPC concerning streamlining of the annual subscription fee procedure would be placed before the Committee on Patent Law of the AC in 2018;

(vi) New epi students: Mr. Thomsen reported on a new curriculum for new students, proposed by PEC for 2018, spread over 3 years. The elements for the 1st year were included in the 2018 budget and included a free webinar. Other elements included a reimbursement of 100 Euros per paper for tutors and student fees of 180 Euros per paper. Students would also receive a grant of 40 Euros towards a basic EPC commentary booklet. Further details of the various elements would be available in due course.

(vii) Professional Liability Insurance for members of the Institute: Mr. Thomsen advised Council that following Council's approval at C82 for carrying on with this initiative with effect from October 2017, a framework contract had been concluded between the epi and RMS, an insurance broker with authority from Lloyd's. As reported at C82, the contract requires a premiums' payment of 200,000 Euros per year, to be reached by October 2018. To date, more than 70,000 euros have been collected.

The contract offers two products: (a) an excess layer insurance of around 1.5M to 2.5 M Euros, taken over from a previous excess contract with AXA (cancelled as of 1stOctober,2017), and (b) a liability insurance covering amounts of from 0 Euro to 5M Euros (there being applicable deductibles): to obtain a questionnaire form from RMS, visit:

(viii) Mr. Thomsen advised Council that the overall budget for the Institute for 2018 is planned to have a small deficit of -42,000 Euros.

The epi-Finances Committee confirmed that it approved all of the Treasurer's proposals.

Following a brief discussion, Council approved the Treasurer's report, and the PEC's proposals for 2018 for studentship.

The President then introduced Alberto Casado, Vice- President DG1 of the EPO who addressed Council on information on and changes at the EPO.

Mr.Casado informed Council that the EPO was the second largest intergovernmental institution in the EU. The Office has been granted ISO 9001, the Office's aims inter alia being to provide access for patent proprietors to the patent system internationally and to grant high quality patents.

Challenges for the EPO are inter alia to provide consistent growth, to handle the continuing trend for filing of applications for multi-disciplinary technically complex inventions, and to manage users' expectations in terms of cost and timelines. To meet these challenges the Office aims by 2020 to increase efficiency, improve quality of granted patents, to improve timelines, to control costs, and to increase its influence internationally. To assist in these endeavours, about a thousand new Examiners have been recruited over the last ten years, and a sub-group of SACEPO is looking at raising quality and is consulting users in EU, USA, PRC, JP and RSK.

The EPO has been ranked the best PO in every IAM survey since 2010.

The new examiners follow a 2 year training programme, the total of 4,400 examiners being split into divisions of 3, and are provided with state -of -the-art tools including access to one of the world's largest databases (1bn records) and 50M original patent documents from Asia. It is aimed to reduce the searches' backlog by February,2018 and examination time to 12 months on average by 2020 (at present it is22.4 months). Patent grants in 2017 were about 100,000, and production in the first half of 2017 was up 4.8%.

In addition to working with other offices towards harmonisation, (148 WIPO member states use the EPO for ISA and IPEA), the internal priority going forward is to provide high quality/legally solid patents to provide legal certainty for users of the system and use of XML filing for increased efficiency. The aim is for an end-to-end granting process, for example each examining team will have an embedded formalities' officer.

Moreover, to cope with the increasing demand (up 18% since 2009) the EPO had in mind the introduction of a system for postponing the start of substantive examination by up to 3 years from filing (which could be curtailed by the filing of third party observations (TPOs).

The XML system is he advised hoped to be in place by 1st April,2018; it would be predominantly pdf.

There followed an extended Q and A session. On a question on quality control, Mr.Casado mentioned that SACEPO had requested meetings to discuss the topic, as a follow-up to this he was reminded that the epi had requested additional representation on SACEPO.

Another questioner queried the fact that when an applicant requests PACE the information is not published, which creates uncertainty for users. Mr.Casado replied that this would be looked into.

Following a question on extension countries, Mr. Casado replied that the EPO makes sure that such a country respects the EPO as such and that therefore the country accepts the responsibility of giving Eps effect in their territory.

In reply to a question on opt out under the UP on grant of an EP, Mr. Casado replied that the need to inform the UP Registrar was already in hand.

The President thanked Mr. Casado for his comprehensive presentation, endorsed with acclamation by Council.

Following Mr.Casado's address, Council considered ToRs as proposed to be amended or revised by the BLC. Thus for the EPPC, Council decided to rename the four technology groups under the EPPC umbrella as Technological Sub-Committees, and for the PCC that none of its members shall be a member of the Disciplinary Board of Appeal, Supervisory Board or Examination Board.

Arts. 18 and 50.1 of the By-Laws were amended by making it clear that there can be associate members of a Committee, but that such members do not have the right to attend meetings, but can be invited to do so by the Committee Chair, costs of/ for such attendance to be decided by the Treasurer.

There was an extended discussion of, and voting for, members to populate the various Committees of the epi. The composition of the Committees as elected can be found elsewhere in this edition of epi Information, and on the website.

Chris Mercer, new chair of EPPC following the elevation of Francis Leyder to the Presidency, led, with the President, consideration of the EPO's proposals for bringing certainty with enhanced flexibility to the granting procedure, including the introduction of a procedure for deferred examination.

There was a lengthy discussion during which Mr. Mercer put forward several scenarios for consideration and voting concerning deferred examination, following which Council decided that the epi, via the EPPC, should write to the EPO to the effect that Council did not favour introduction of deferred examination under the EPC.

AOB: (i) Council approved a proposal that epi representatives having a meeting with the Supervisory Examination Board should consult with the PEC before any such meeting;

(ii) Mr. Casalonga for Litcom reported that as there is a delay in implementing UPPC systems, the 'sunrise' period might now begin in spring 2018. The system should be tested, and moreover the opt out provision might need at least 5 months per patent to implement. He proposed that a 'package' for opt out should be studied in cooperation with the OCC, and also that the epi should liaise with the Preparatory Committee and insist that the opt out provisions be tested before implementation.

(iii) The President advised Council that the Reporting Group would report to Council at C84 in Valetta. Meanwhile the composition of the group will remain as it is and will dealing only with Council matters and a new group will be established with the following members: Mr. Pereira da Cruz, Ms Vogelsang-Wenke, Mr Casey, Ms Allwarth and Mr Durán. This additional new group will deal with epi Secretariat matters.

Led by the President, Council observed a minute's silence in honour of Mr. Benatov, a founder member of the Bulgarian delegation and who had recently died.

Council thanked the Polish delegation members with acclamation for their efforts in organising a very successful meeting.

The President warmly thanked the Secretariat for their work in ensuring that the meeting, including voting, went as smoothly as it did. Council endorsed the President's words with acclamation. 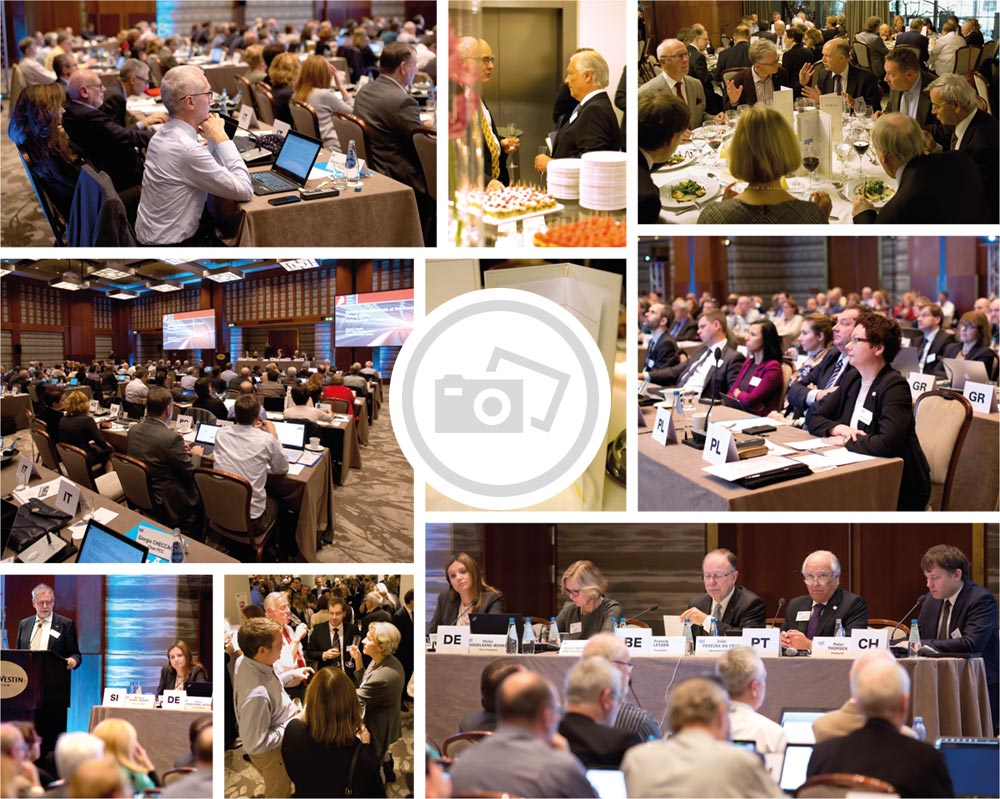