Meeting opening – Adoption of the Agenda

President Leyder opened the meeting at 9 am. Apologies for absence were noted after which the agenda was adopted with slight changes, namely item 10 (report of the internal auditors) was cancelled and item 16-5 (report of By-Laws Committee) was combined with item 13 (amendments of the By-Laws).

Council then observed a minute of silence in memory of Mr Christiansen (DK), a former Council Member (until 2014), and a long-standing member of many committees.

The minutes of the last meeting were approved and the Secretary General informed Council Members that the action points arising from the last meeting (online test voting and opening of threads in the forum re the EBA referrals) had been completed.

Report of the Board

The President referred to his report in the accumulated file, and reminded members that minutes of the Board meetings are available in a dedicated area in the forum (NB: which can be accessed on the epi website after login).

Vice-President Kunič Tesović updated Council Members on the implementation of the Workshare platform on the website (a presentation was displayed showing how to use it). The platform will be available to all epi members shortly after the Council Meeting.

Report of the Secretary General

Report from the Treasurer

1) As of mid-October 2019 the budget is in line with what had been planned. Income revenues are slightly higher than expected (because a high number of candidates passed the EQE, generating additional subscription fees), and expenses are under control. The Treasurer indicated that there was accordingly no need to adapt the 2019 budget and the planned deficit of 65 k€, which measure was supported by the epi-Finances Committee. This was approved by Council.

2) The Treasurer then provided an update on a number of on-going projects, including:

A discussion followed during which the Treasurer gave further explanation on the program and how this would impact the Secretariat (FTE-wise). Council then approved the proposal that epi would administer the above-mentioned regional fund.

The budget and the amount of the annual subscription fee for 2020 were approved by Council.

The Chair of the BLC presented a series of amendment of the By-Laws intended to regulate the decision taken at the previous Council meeting (C86) to appoint an Executive Director to “un-burden” the Secretary General and the Treasurer. The amendments presented concerned articles 10B, 15-17, 18, 18a, 21, 26, 27, 64, 67 as well as transitional provisions. These amendments were approved at a large majority (4 objections and 4 abstentions).

Another amendment concerning article 7.2 (possibility to elect the new Board towards the end of the meeting of the newly elected Council rather than at the beginning) was also approved at a large majority (1 objection).

A decision on other amendments concerning article 4.1 and 4.2 was postponed to the next meeting.

Report of the Electoral Committee

The Chair of the Electoral Committee reported that Denmark voted (via the online tool, which worked very well) to change from non-unitary to unitary constituency. Council was also informed that the nomination process for the next Council election needed to be re-opened in the following constituencies or groups in which fewer people applied as the number of seats available: HR, CY, CZ, DK, EE, FI, HU, MT, NO, SK, SI, ES, TR, GB.

1) The Chair of the European Patent Practice Committee (EPPC) reported that WIPO will for the time being retain facsimile transmission as a backup filing means.

2) The Chair of the Litigation Committee informed Council that the chief judge in charge of the constitutional complaint against the UPC in Germany had given an interview in which he was quoted to say that a decision on the complaint could be issued in the 1st quarter of 2020.

3) The Chair of the Professional Education Committee presented a proposal to amend Rules 11-14 of the IPREE (Implementing provisions to the Regulation on the European Qualifying Examination). The main aim of the proposal is:

4) Vice-President Vogelsang-Wenke proposed to set up a working group to establish a new Committee, namely the IP Commercialisation Committee (IPCC) which would inter alia tackle the following issues: IP valuation and monetarization, portfolio optimization, assignment of IP rights, licensing matters, notably in cooperation with other organizations such as LESI, FICPI, AIPLA. This proposal was unanimously approved by Council.

A large part of the afternoon was devoted to a speech given by the President of the EPO, Mr António Campinos, followed by a Q&A session.

Mr Campinos addressed Council to present the Strategic Plan that was voted by the Administration Council of the EPOrg earlier this year, plan which comprises 5 goals, namely:

Mr Campinos stressed that while many changes occurred since the EPO was created, there is one constant over the years which is the relationship with the epi, “EPO’s closest partner”. Mr Campinos pointed out though that it is not enough to look back, because our patent system has to evolve and so has our collaboration.

Mr Campinos noted that there is a need for a high level of quality, which is the bedrock of the patent system, and that this needs to be nurtured by the users of the system. High quality starts with quality drafts, but there must be a common understanding (between EPO and its users notably epi) of what high quality means. High quality also supposes that the EPO masters the prior art, which requires cutting edge IT tools but also that the number of samples for quality control increases (control will include formalities and opposition). In this respect, Mr Campinos pointed out that epi’s input, via SACEPO, is most valuable.

Mr Campinos also mentioned that we (i.e. EPO and epi) have to address the anticipated loss of patent attorneys in some member states due to the simple fact of demographics.

During the Q&A session, Mr Campinos suggested that enhanced cooperation between EPO and epi could be contemplated e.g. in the following areas:

Council thanked the Portuguese delegation members with acclamation for their efforts in organising a very successful meeting. The President then closed the meeting at 5:00 pm. 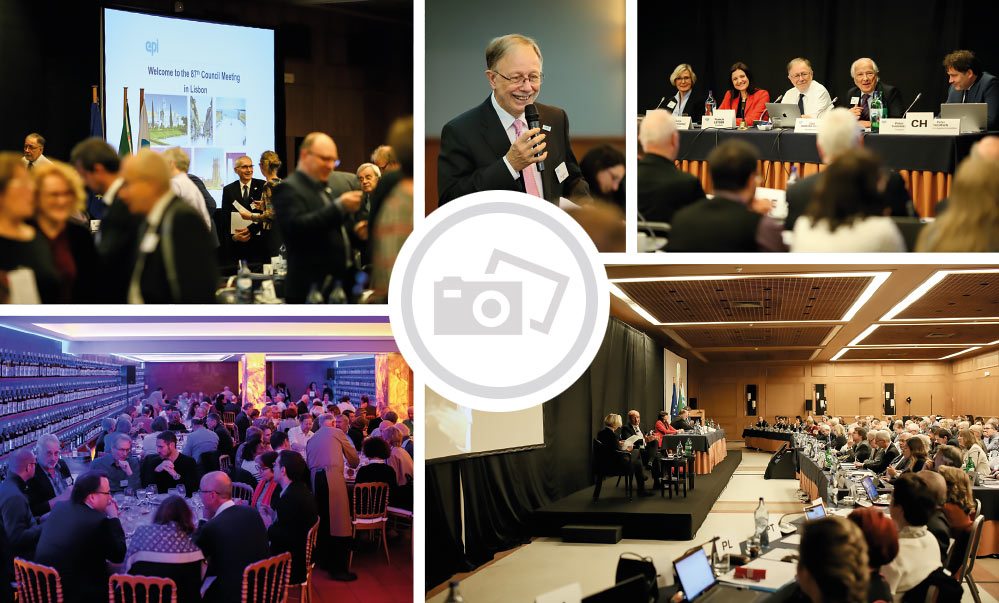