Initially scheduled to take place in Ljubljana, the 89th Council meeting (C89) was held on 13th and 14th November 2020 by videoconference.

1/ Meeting opening and appointment of scrutineers

President Leyder opened the meeting at 2 pm and welcomed all participants. Separate scrutineers were appointed for 13th November and 14th November.

2/ Adoption of the provisional agenda

The agenda was adopted with one change, namely a discussion, as part of the report of the EPPC Chair, of the recent decision of the EPO to impose oral proceedings in opposition by videoconference until mid-September of next year.

3/ Confirmation of the list of nominations for the Committees

The Secretary General reminded Council members of the rules (and time limits) set forth in the By-Laws to apply for a position within a Committee, and indicated that late filed applications (including those potentially filed on the first day of the meeting) would have to be reviewed and decided on a case-by-case basis.

The minutes of the last Council meeting were approved. The Secretary General had prepared a document in tabulated form (included in the accumulated file distributed in advance to Council members) listing the action points arising from previous meetings and their status (completed or still on-going). This proved to be a very efficient manner to review the actions taken.

5/ Report of the President and Vice-Presidents

After a break, the President of the EPO addressed Council members and participated in a Q&A session.

Mr Campinos stressed that the epi Council meeting provides a unique opportunity for the EPO to reach out to a wider audience of epi members attending from different parts of Europe, and for patent professionals to hear from and engage with the EPO President on topics of interest to them, and provide their direct feedback.

Mr Campinos spoke about recent measures taken to ensure business continuity and support users during the pandemic, the importance of close co-operation with stakeholders and their involvement in Office initiatives: “We're very grateful for the role that epi plays in the quality process. Because frequent and in-depth exchanges with our users...that's how we can deliver even better products and services.”

Mr Campinos updated Council members on progress with the pilot project on opposition proceedings by videoconference, following the publication of a progress report. Mr Campinos explained the latest changes, and called on Council members, and more generally epi members, to provide their feedback so that the EPO can further finetune its systems and tools according to their needs and safeguard their rights.

Mr Campinos informed Council members that as of mid-November the number of applications filed with the EPO was roughly 4% below expectations, and highlighted the fact that the EPO had just signed a two-year pilot program with CNIPA, effective as of December 1, 2020, whereby Chinese nationals or residents will be able to select the EPO as International Searching Authority (ISA), under the PCT, for PCT applications filed in English with CNIPA or the International Bureau.

In the ensuing Q&A session, moderated by our Vice-President Vogelsang-Wenke, Council members addressed a wide range of issues such as the EPO's financial situation, especially in light of COVID-19, what's in store for procedural fees, the EPO's quality management system, plans for a European Patent Administration Certificate, convergence of practices, and special fast-track services for applications related to COVID-19. On the question of the reason for signing a pilot program with CNIPA, Mr Campinos indicated that it was the EPO's aim to become the first ISA in the world. On the question of fast-track services for applications related to COVID-19, Mr Campinos indicated that no such services had been implemented, but noted that search and examination can be accelerated if needed via the PACE program.

Finally, Mr Campinos stressed the importance of seeking user involvement in all of our future initiatives, and expressed the EPO's commitment to close co-operation with epi through frequent regular bilateral meetings with the epi Presidium. Mr Campinos promised to address the epi Council meeting again next year.

7/ Report of the Secretary General

8/ Report of the Treasurer

a) The Treasurer informed Council members that the SARS-CoV2 pandemic had a substantial influence on the operations and finances of epi. Various positions in the budget have been affected by the pandemic, both on the income and expense sides. For example, the cancellation of EQE 2020 resulted in no new additional members and therefore less income from the annual subscription, but also less turnover on expenses of EQE Committees. Higher expenses than originally expected became necessary on IT and epi administration due to the technical measures to be taken to make virtual Council meetings and Committee meetings possible. This year personnel and related expenses will also be slightly higher than planned due to over-hours and necessary infection protection measures.

The Treasurer also informed Council members that after discussion with the Editorial Committee, it was agreed to exceptionally have the last 2020 issue of epi Information printed and distributed as a hard-copy to all members which will represent an expense of ca.35-40 k EUR.
Due to the overall changed financial situation mentioned above, the 2020 budget should result in a surplus of +149950 EUR compared to an originally planned deficit of -90500 EUR.

b) Regarding the status of epi, the Treasurer informed Council members that epi has received a legal opinion on epi's situation under the newly enacted German national Host State Law (Gaststaatgesetz), by which the German government intends to be attractive as a host state for newly located international institutions.

c) Concerning the Professional Liability Insurance (PLI) the Treasurer informed Council members that the epi-supported PLI is still available and all previous contracts have been renewed upon request of the insured members. Although the insurance is currently used by more than 200 members, the annual premium amount could not yet reach 200 k EUR which would be important for a long-term sustainable product. The Treasurer also noted that the current scheme proposed might not be so interesting for large firms.

9/ Report of the epi-Finances Committee

The Chair of the epi-Finances Committee referred to his report in the accumulated file, and expressed his thanks to the Treasurer for all the work done during the pandemic. He also expressed the view that at least some of the webinars organized by epi should not offered for free.

The Budget proposed by the Treasurer contains a high level of uncertainties mainly because of the unknown duration of the current restrictions in connection with the SARS-CoV2 pandemic. For the purpose of the budget 2021, it was assumed that physical meetings may become possible again from around May/June 2021. The Treasurer explained that in case epi cannot use the bookings for a Council meeting in Glasgow, there may be the risk of a financial loss (up to ca. 70 k EUR). Tne Treasurer also noted that, as the recruitment process for an Executive Director is ongoing, it is expected that such position can be filled in early 2021 leading to an increased budget for personnel. The Treasurer further indicated that several heavy software projects are planned to be implemented in 2021 (e.g. selecting and implementing a Document Management Software with an electronic ledger, digital reimbursement process) leading to increased expenses on the support/IT side. The Treasurer proposed to keep the amount of the annual subscription for 2021 at 190 EUR if paid before April 1 and 240 EUR if paid after April 1. The annual subscription for epi studentship would still amount to 95 EUR. Overall, it was proposed to adopt a budget for 2021 with a planned deficit of -197060 EUR.

Council approved at a large majority (>95%) the amount of the subscription fee for members and students. Council also unanimously approved the proposed budget for 2021.

11/ Report of the Internal Auditors

The reasons given for the proposed amendment include the wish to remove an excessive burden for the Treasurer (per to the current wording of the article) and to be more aligned with current practice.

Council approved the proposed amendment at a large majority (>98%).

The meeting was suspended at 5pm. Three break-out rooms were then open, which allowed participants to renew social contacts, even virtually.

The meeting resumed at 9.30 am. Most of the day was devoted to the election of Committee members. Before the vote started, the Secretary General informed Council members that 5 late nominations were received on 13 November and would not be taken into consideration.

The detailed composition of these Committees is available on the epi website (https://patentepi.org/en/epi-bodies/epi-committees).

The Chair of the EPPC presented the consultation which had just been launched by the EPO on the proposed amendment of the RPBA 2020 by the insertion of new Article 15a clarifying that the Boards of Appeal may hold oral proceedings pursuant to Article 116 EPC by videoconference. This gave rise to discussion on the matter of oral proceedings in general. As a result of the discussion a Resolution was passed by a large majority. The wording of the Resolution is as follows:

Council considers that, after the Covid-19 pandemic is over, oral proceedings should as a rule be held face-to-face but any party should be free to attend oral proceedings by videoconference, even if the other parties are attending in person.

14/ Report from the Committee on Biotechnological inventions

The Chair of the Biotech Committee informed Council members that discussion with the EPO was on-going after the decision in case G3/19 in order to clarify a number of outstanding issues (e.g. random mutagenesis or mandatory disclaimers). Il was also noted with interest that the number of applications for plant varieties was on the rise following G3/19.

A draft position paper was presented to Council members with proposals to restructure the format and content of the EQE. It must be borne in mind that any changes to the content of the papers requires that the IPREE be amended (in particular rules 10 and 23 to 26) sufficiently in advance so that candidates can be trained for the new format (and papers can be prepared of course!). It seems possible that a new format or a hybrid format (changes to some but not all papers) could be implemented as early as 2023.

The strengths and weaknesses of all papers were discussed, and proposed changes to the content and format were reviewed. It is quite obvious that since the EQE will from now on be organized as a virtual examination, the papers will have to be split in different parts so that candidates can take breaks.

Suggestions and thoughts from all epi members are of course welcome and can be sent to the PEC.

16/ Report from the Professional Education Committee

The Chair of the PEC provided Council members information on the issue relating to epi involvement in establishing a European Patent Administration Certificate (EPAC) in cooperation with the EPO. The possibility of having an examination as early as in 2022 was discussed.

This was the last report of the meeting, which was then closed by President Leyder at 6pm. The participants could then again meet in break-out rooms. 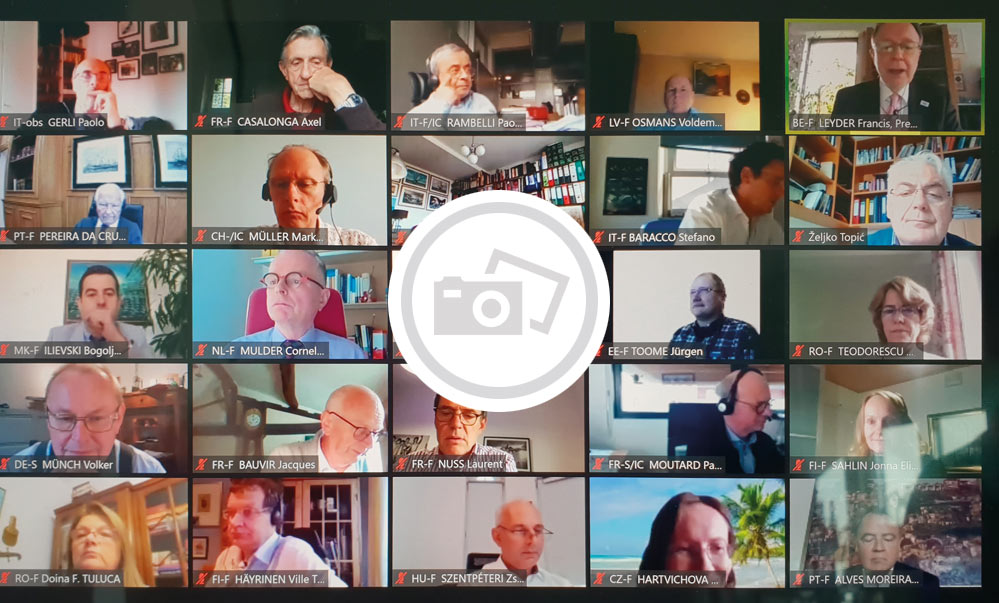