The Lawfulness of Using Competitors’ Trade Marks in Keyword Advertising

When Nicole joined epi as our first Legal Advisor, I was chairing the EPPC, and started cooperating with her for the committee I was chairing. Then I learned that her story was the same as mine: she had pretty much done her PhD thesis but needed to write it (for me, it was the practical work finalised just before my military service). Since then, I have been encouraging Nicole to finish, because I know how hard it is when you have a new job (and a family). I was so sad that the sanitary situation prevented me from attending and congratulating her in person, as I had promised. In the Netherlands, PhD candidates defend their dissertations during a traditional public ceremony, called promotion. Luckily, the defence was organised in mixed mode, with three members of the Doctoral Examination Committee and one of her promoters attending remotely, and the ceremony was transmitted on YouTube. As I watched the defence online (the recording is available), I was surprised to see two persons sitting on either side of Nicole, with no apparent role. Later, she explained that these were the paranymphs, in this case her sister and brother-in-law. I researched a little, and found the explanation: the word paranymph comes from Greek, literally 'person beside the bride'; using paranymphs during a PhD defence is a typical Dutch ceremonial tradition. Then, I also found out that in some Dutch universities it is a tradition to give to the attendees (who usually attend out of sympathy rather than for the topic) a booklet explaining the thesis in language accessible to lay persons. This was the idea for an article. I thank Nicole for having accepted to draft it, and the Editorial Committee for having accepted to publish it; we know that many of our members are also trade mark practitioners. I hope your will enjoy reading it.

Introduction by the Author

As mentioned by our President, when I joined epi in 2012 as Legal Advisor, I was trying to finish my PhD thesis on “The Use of Trade Marks in Keyword Advertising”. I had performed my research at the Max Planck Institute for Intellectual Property and Competition Law (MPI) in Munich. At that time, keyword advertising was one of the most controversial issues in IP law and still a rather new phenomenon.

Now, many years later, the topic of keyword advertising is still highly relevant. In fact, its importance has recently grown. The principles developed with regard to search engine advertising are currently being applied by courts with respect to online market places. An example of such a court case will be provided below.

What is Keyword Advertising?

Keyword advertising is a commercially successful online business model. The most familiar example is “Google Ads”. Through an online procedure, advertisers can select keywords that are relevant to their product. If a search query by an Internet user matches the selected keyword, the advertisement appears. The search engine (usually Google) receives a payment from the advertiser for each click on the ad.

This context-sensitive form of advertising enables advertisers to target a specific group of consumers. By choosing the trade mark of a competitor as a keyword, an advertiser can attract the attention of consumers with an interest in that mark.

The use of trade marks in keyword advertising touches the interests of advertisers, search engines, trade mark owners, consumers and the public interest. It involves a substantial number of policy concerns and fundamental rights, such as the freedom of competition, the freedom of expression and information, fairness of market behaviour, promotion of e-commerce, protection of intellectual property and consumer protection.

Applying trade marks as internal, invisible keywords differs from the classical use of trade marks on products, on packaging or in conventional advertising. The existing trade mark laws had not anticipated this kind of trade mark use. It was unclear whether European trade mark law was applicable at all with regard to keyword advertising and, if yes, how the infringement criteria were to be interpreted in this respect.

The main question in the discussion on keyword advertising has been whether, and to what extent, trade mark law should prohibit or allow the use of competitors’ trade marks as keywords. This has given rise to a more fundamental discussion on the scope of trade mark protection.

The Cour de cassation basically asked whether the trade mark owners were entitled to prohibit the search engine from selling the keywords and the advertisers from buying the keywords. The relevant legal provisions to be interpreted concerned the infringement provisions of Article 5 Trade Mark Directive (now: Article 10) and Article 9 Community Trade Mark Regulation (now: EU Trade Mark Regulation). A further relevant provision regarding Google’s liability was Article 14 of the E-Commerce Directive, which exempts hosting providers under certain circumstances from liability.

In Google v. Louis Vuitton, the CJEU clarified that the use of trade mark keywords by advertisers falls within the meaning of the harmonised infringement provisions of the Trade Mark Directive, thus avoiding fragmented approaches under national unfair competition laws. The CJEU also clarified that the use of competitors’ trade marks as keywords is, under certain conditions, allowed. Decisive is mainly whether the text of the ad is sufficiently transparent for the Internet user to determine whether the advertised products originate from the trade mark owner or from a third party. The CJEU left it to the national courts to assess this issue based on the particular facts of the case.

The CJEU did not regard the use of the trade mark keywords by Google as being relevant under trade mark law. Since Google does not use the marks in its own commercial communication, the CJEU suggested to rather assess Google’s role under national rules on liability of intermediaries in conjunction with the liability exemptions in the E-Commerce Directive. In this regard, the CJEU ruled that the hosting exemption only applies to intermediary service providers with a neutral role, which needs to be assessed by the national courts.

The principles developed by the CJEU were then applied by the national courts of the EU Member States in a vast number of cases. In my dissertation, case law from the Netherlands, Germany, the UK, France and Austria is analysed. In addition, a comparison with keyword advertising decisions from the US is made.

The analysis of national jurisprudence demonstrates a certain level of conformity among the national courts in the interpretation of the CJEU’s guidance. Divergences remain to some extent inevitable due the particular circumstances of each case before the national court. However, certain national courts have wrongly interpreted the CJEU guidance with negative consequences in terms of legal certainty, free movement, competition, consumer information, e-commerce and freedom of expression.

As mentioned above, the principles developed in the keyword advertising cases have proven to reach beyond their original context, for example, in cases regarding the use of keywords to generate product listings on online market places, such as eBay or Amazon.

The German BGH (Bundesgerichtshof = Federal Supreme Court) recently applied the lessons learnt from the keyword advertising jurisprudence in disputes between the owner of the trade mark “Ortlieb” (for bicycle bags) and the online marketplace Amazon.

The case Ortlieb II[2019] GRUR 1053 (BGH July 25, 2019). concerned ads by Amazon on the Google website with links to listings of products on the Amazon website. Besides offers of Ortlieb bicycle bags, offers of bicycle bags from other brands were shown in the linked results list. The BGH confirmed the Court of Appeal’s finding of infringement due to the specific design of the ads in conjunction with the mixed list of results. The origin function of the trade mark was adversely affected because the relevant public expected to only be shown offers from Ortlieb when clicking on the ads. 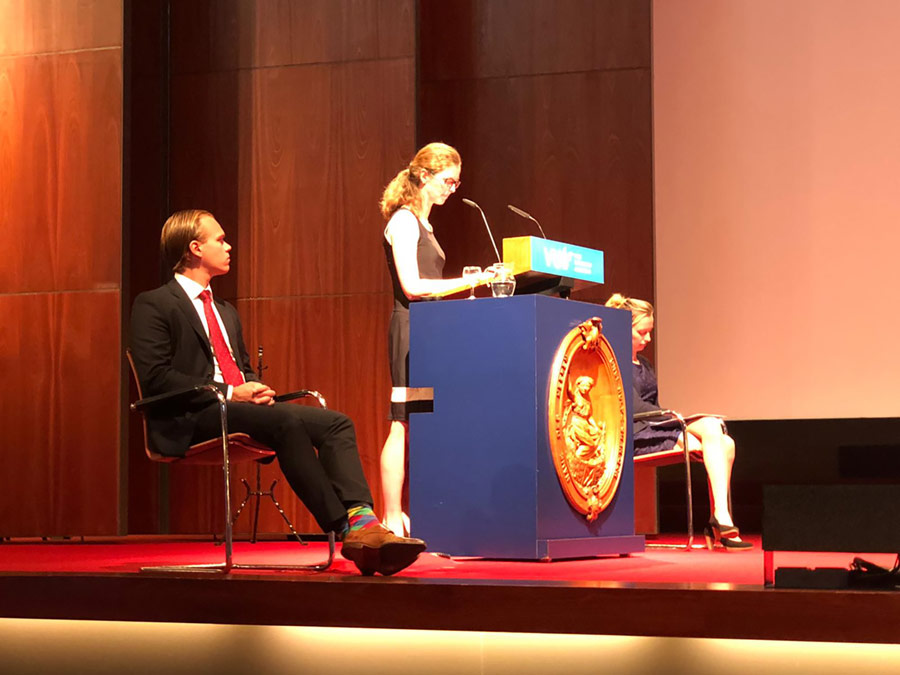 Nicole with paranymphs during PhD defence

Based on an analysis of years of literature and jurisprudence in this area, the dissertation reveals the considerable impact of the keyword advertising judgments on the infringement conditions under European trade mark law. The CJEU has moved from a rigid interpretation of the infringement provisions towards a flexible weighing of interests of the trade mark owner, third parties and the public at large.

The CJEU’s interpretation of the infringement criteria in keyword advertising disputes is endorsed in the dissertation. The CJEU does not regard the use of another’s trade mark as a keyword as an infringement per se. The focus on the need for transparency in online advertising reflects a balance between adequate trade mark protection and other important policy aims such as competition and consumer information. The leeway left to the national courts enables a thorough examination of the circumstances of each case.

Despite the advantages of this approach, the CJEU’s focus on the trade mark functions is criticised. It is argued that this lacks a foundation in European trade mark legislation, results in an inconsistent system of infringement criteria, and that it is detrimental to legal certainty. A number of solutions are proposed to address these problems. The most feasible solution is to expand the scope of the limitations. In fact, owing to the reform of the European trade mark system, this expansion has already begun. A broader catalogue of limitations, possibly including a general fair use clause, would render the CJEU’s functional approach redundant.

Besides legislative proposals, suggestions are provided for a more precise interpretation of the CJEU’s guidance under the current law in order to avoid diverging national court decisions and to enhance legal certainty. In general, the absence of the disputed trade mark in the advertisement itself and the mentioning of the advertiser’s own identity should be sufficient to deny an infringement. In any case, the interests of competition and consumer information must be taken into consideration.

Keyword advertising remains an important topic. Search engine advertising is still of considerable and increasing commercial relevance. In addition, as seen above, the principles developed in this regard are nowadays being applied beyond the context of search engines with respect to other online business models in which trade marks are used as navigation tools. Furthermore, the case law on keyword advertising has had an immense effect on trade mark infringement law in general.

If you are interested in this topic, please consult my dissertation, which can be freely accessed on the Research Portal of the Vrije Universiteit Amsterdam (https://research.vu.nl/en/publications/the-use-of-trade-marks-in-keyword-advertising).