President Leyder opened the meeting at 9 am and welcomed all participants. A test vote was conducted and scrutineers were appointed.

2. Adoption of the agenda

President Leyder informed Council of the passing away of Mr Terence Johnson (GB), a former Council member, and of Mr Francisco Bernardo (ES), then a current Council member. President Leyder reminded Council of their career and involvement within epi. Mr Arias (ES) gave a eulogy for Mr Bernardo; Vice-President Vogelsang-Wenke read an email that Ms Johnson’s widow sent to President Leyder in reply to epi's condolence letter, and Ms Schellenberg (Secretariat) and Mr Mercer (GB) gave a eulogy for Mr Johnson. A minute of silence was observed by Council.

4. Confirmation of the list of nominations for elections to Committees

The Secretary General, Ms Sirakova, confirmed the name of members having applied for a position in Committees with a vacant seat.

5. Adoption of the minutes of the 90th Council meeting (C90) - matters arising from the decisions and actions recorded during C90 and previous Council and Board meetings

Mr Mulder (NL) noted that the point raised during C90 (discrepancies in the version of By-Laws available on the website at that time) had seemingly not been solved. Mr Moutard, Chair of the By-Laws Committee, explained that the most recent version uploaded on the website was in conformity with what had been decided during C87 (Lisbon). The minutes of C90 were approved. Secretary General Sirakova then referred to the accumulated file available to Council members concerning the actions still pending.

Mr Campinos provided an update on developments at the EPO since he addressed Council a year ago. Mr Campinos in particular stressed the following points:

Mr Campinos concluded his presentation by saying that he was glad that the Unitary Patent system was on the verge of entering into force (likely in 2H22 or 1H23).

The text of the speech of Mr Campinos is available for epi members in a dedicated area of the website.

7. Report of the President and Vice-Presidents

President Leyder referred to his report in the accumulated file, which included the activity of both Vice-Presidents.

President Leyder also presented a revised draft of the strategic plan of epi as promised during C90. The plan was adopted at a large majority (93 in favour, 3 against, 16 abstentions).

Council also noted that, as promised during C90, the Audit and Assessment report was made available to Council members in redacted form.

8. Report of the Secretary General

9. Motion of the German delegation

The German delegation wished to have the "mood" of Council members on how future Council meetings should be organized, i.e. in person, virtual or in hybrid format. A vote ensued which gave the following result:
In favour of in-person meetings: 80 (67%)
In favour of virtual meetings: 4 (3%)
In favour of hybrid meetings: 36 (30%).

10. Report of the Executive Director

The Executive Director, Ms Lissak, presented the progress made within the Secretariat since the last Council meeting, in particular on the following points:

The Treasurer, Mr. Thomsen, presented a snapshot of the financial situation as of October 14, 2021, as well as a forecast for the remainder of 2021.

Revenues at the end of year are expected to be lower than planned (-136 kEUR). Expenses are also expected to be lower than planned, but to a greater extent (+440 kEUR), resulting in a planned surplus of +304 kEUR whereas the original 2021 budget had a planned deficit of - 197 kEUR. Concerning the 2021 expenses, the Treasurer noted that there is a significant increase in personnel salaries, Finance & Law, and IT compared to the budget. As many as 25 IT projects are being (have been) run to improve inter alia cybersecurity and the IT-architecture.

The Treasurer also provided an update on a number of topics and on-going projects, including:

12. Report of the epi-Finances Committee (part 1)

The Chair of the epi-Finances Committee, Mr. Quintelier, referred to his report in the accumulated file, and was pleased to note that a financial forecast had been included in the Treasurer's report.

The 2022 budget was prepared assuming a return to a "new normal" situation and 1 "physical" meeting for each Committee, without increase of the subscription fee.

A sharp increase in revenues is expected compared to the 2021 budget (+ 20%), mostly coming from educational events. A sharp increase in expenses is also expected compared to the 2021 budget (+ 18%), with education, IT and salaries being the areas with the most significant increases. In particular, an unprecedentedly high IT budget of 374 kEUR is planned, to cover inter alia the implementation of a central Document Management System (DMS) which will be the pre-condition to fully digitalize the accounting processes. Other It projects started in 2021 will be carried out in 2022, including projects on cybersecurity. Another opinion on the legal status of epi will also be sought. The number of educational events will also increase as it can be assumed that the Unitary Patent/ Unified Patent Court system will become operational during 2022, triggering a demand for a number of educational epi products on that topic, which justifies hiring an additional temporary staff member.

Taking into account all those factors, the Treasurer indicated that a budget with a deficit of -193 kEUR is planned for 2022.

14. Report of the epi-Finances Committee (part 2)

The Chair of the epi-Finances Committee reported that the Committee noted with approval that there is no plan to change the membership subscription, and approved the Treasurer's proposals with respect to the 2022 Budget, investments in infrastructure and software in the Secretariat.

In the context of a proposal to amend the Rules governing epi Studentship, Mr Boff suggested to use, from now on, gender neutral language in epi documents generated in English. In this respect Council was asked to resolve that when referring to a generic or unidentified person, such persons shall be indicated using the singular "they" or its derivative forms "them", "their", or "theirs" as appropriate.

The Chair of the epi Studentship Committee, Mr Mercer, then presented a proposal to amend the Rules governing epi studentship. The proposal was mainly intended to streamline the procedure to become an epi Student and therefore to simplify the administrative control of the students' application.

The Treasurer then presented a "discussion paper" on a potential change of practice regarding the annual studentship fee. The problem notably arises from the fact that if an epi Student pays the studentship fee at the beginning of the year and then passes the EQE, they will also have to pay the "regular" subscription fee. This could be regarded as an unfair double payment. In such a situation it could be contemplated that the successful epi Student only needs to pay 50% of the "regular" subscription fee.

The paper will be discussed with the By-Laws Committee in order to make a proposal at the next Council meeting.

17. Election and by-election of Committee Members

A member of the Disciplinary Committee was elected as of 1st January 2022 for the remainder of the 3 year-term that will end in the spring of 2023.

Full and/or substitute members of the following Committees were elected (in that order) for the remainder of the three-year term that will end in the fall of 2023: Committee on Biotechnological Inventions, Litigation Committee, Online Communication Committee, Professional Conduct Committee.

The detailed and up-to-date composition of the Committees is available on the epi website (https://patentepi.org/en/epi-bodies/epi-committees).

These decisions define the rules governing how Committee members are elected during Council meetings (either according to the general election procedure or to by-elections procedure). The aim of the amendments is to save time during Council meetings and better streamline the committees election process. The general election would be carried out by electronic voting before the relevant Council meeting, and the result would be confirmed during the meeting itself. There would be no reopening of vacant positions. These measures would not apply to elections to the Disciplinary Committee. A first draft of amended decisions 3.3.4 and 3.3.5 was presented.

19. Professional Conduct Committee: proposed amendments of the Code of Conduct

The Chair of the PCC, Mr. Checcacci, presented proposed amendments to the Code of Conduct, in particular in relation to article 4 (conflict of interest) and article 5 (relationship with other members), as well as the creation of a new article concerning conduct provisions in connection with elections within epi. The proposed amendments need to be further discussed and fine-tuned before a decision can be taken by Council.

Mr Tiem Reijns (NL), a member of the EQE Examination Board, provided Council members with an update on the eEQE 2022. Candidates received in October access to the Wiseflow platform onto which a number of past papers had been loaded. Mock papers have been prepared by epi and will be made available to candidates.

Concerning the future eEQE, an analysis of dozens of previous papers is on-going with the aim of identifying, for each paper, the criteria to be tested. A set of modular papers will be presented once the analysis is done.

In its September 2021 meeting, the Board decided to create an ad-hoc working group to address the topic of diversity and inclusion. The Chair of the working group, Mr Névant, presented the issues at stake (context, what are diversity and inclusion, why is it important for epi to look into this matter). On behalf of the working group, Mr Névant requested permission from Council to continue its work until at least C92 in order to (i) come up with a policy statement, (ii) help providing material to support our members to best address and adapt to the need of our clients, and (iii) propose actions to grow epi's commitment to diversity and inclusion.
This request was approved by Council.

The Chair of the IP Commercialization Committee, Mr. Stöckle, presented a proposal to create a European Patent Commercialization Certificate aimed at showing that a professional representative has acquired skills to cooperate with lawyers regarding the valuation of patents. The certificate would be obtained on a voluntarily basis.

The Swiss delegation presented a motion to postpone the vote on the EPCC to a later Council meeting. The motion was approved by Council (78 in favour (90.7%), 8 against (9.3%), 6 abstentions).

The Chair of the Litigation Committee, Mr. Thomsen, reported progress of discussions with the EPO Legal Division concerning the possibility to include UPC activities in our Regulation on Discipline. Mr Thomsen also mentioned that the process of appointing members of the UPC Advisory Committee will start soon. The Advisory Committee is in charge of establishing a list of candidates to be appointed as judges of the Court, and will be composed of one representative of each Contracting State. Mr Thomsen stressed that at least one of the representatives should be a European Patent Attorney.

24. Review of decisions and actions and closing of meeting

The Deputy Secretary General listed all decisions made and actions taken during the meeting. President Leyder then thanked the participants and the support team before closing the meeting at 6:55pm. Break-out rooms were opened so that the participants could continue discussing various topics on an informal basis. 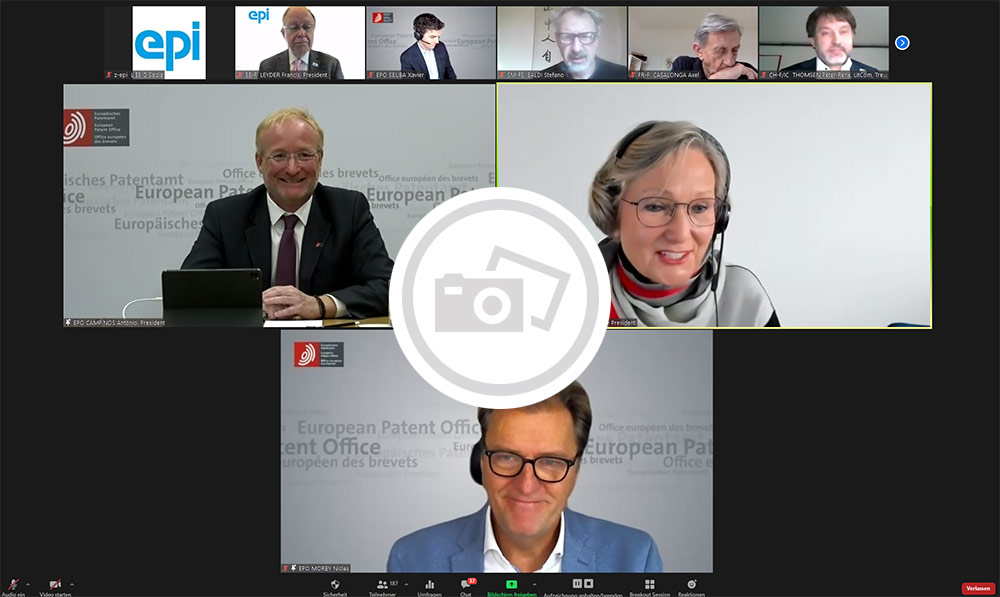