Artificial Intelligence (AI) is fast becoming part of our everyday lives, changing how we work, shop, travel and interact with each other. Yet we are only at the beginning of discovering the many ways in which AI will have an impact on – and indeed challenge – business, society and culture. Also, the field of IP will be heavily affected by AI, and not only in the way that patents will be granted on inventions in the field of AI, but also in the way that AI will be (or already is) able to create inventions itself. Who will own such an invention? Moreover, AI is already used in patent offices around the world to search for prior art and to translate patent literature. AI also poses new questions in the field of data protection and copyright. Hence, the relationship between AI and IP is multi-faceted and it is high time to discuss all the issues arising in a comprehensive way, on a global level and with all stakeholders involved. That is why WIPO organized a conference on this topic and invited delegations from its member states, people from industry, academia and other organizations, such as lobbying and professional organizations as well as industry associations. epi was also invited and sent a delegation of three European Patent Attorneys, Matteo Pes (IT), Marjut Honkasalo (FI) and Michael M. Fischer (DE) from epi`s ICT Subcommittee. The conference was attended by approximately 350 participants and also webcast to reach an even larger audience. Video summaries of the conference are available on WIPO`s webpage and are linked in the following.

Mr. Francis Gurry, Director General, WIPO opened the conference by welcoming the panelists and the audience. He gave a short overview of the conference’s programme and explained that AI is raising a broad and multi-disciplinary range of policy questions. One of those questions is property and intellectual property. A video of the opening statement can be found here. 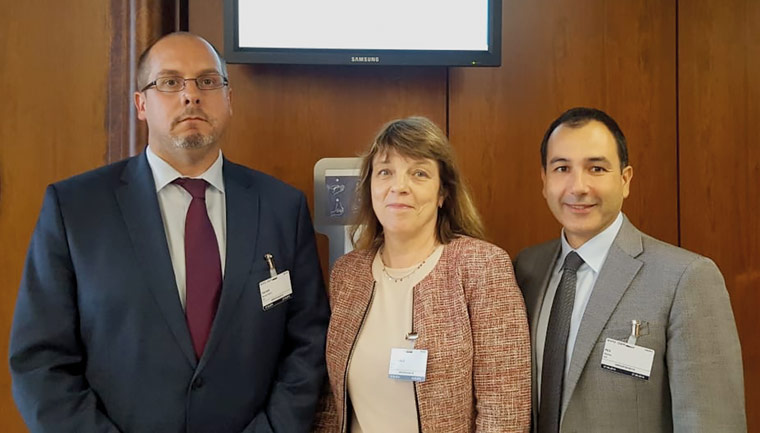 The conference was divided into six one-hour panels:

The first panel, Opening Panel, discussed what impact AI has on the IP System and IP Policy. The panelists were Mr. Andei Iancu (Under Secretary of Commerce for IP and Director of the USPTO), Ms. Nuria Oliver (Data-Pop Alliance), Ms. Karin Meyer Rubinstein (Israel Advanced Technology Industries), and Mr. Zeng Zhihua (China National Intellectual Property Administration). The panel was moderated by Mr. Francis Gurry and the panelists discussed AI`s impact on innovation, commercial markets and industry. Other questions that were discussed: What IP-related issues doe we have regarding AI`s rise? Will AI change IP traditional concepts? Why? What needs to be done in the IP area to support AI innovation? What impact does AI have on IP Offices? It is worthwhile mentioning that Andrei Iancu explained that the USPTO is interested in gathering information on patent-related issues regarding artificial intelligence inventions for purposes of evaluating whether further examination guidance is needed to promote the reliability and predictability of patenting artificial intelligence inventions. To assist in gathering this information, the USPTO is publishing 12 questions on artificial intelligence inventions to obtain written comments from the public. The questions can be found here. Answers from the public (also from readers of this article!) can be sent to aipartnership@uspto.gov (original deadline has been extended to November 8, 2019 and will possibly further be extended). A video summary of the main statements of the Opening Panel can be found here.

The second panel, Patent Panel, discussed the many-faceted relationship between AI and patents and was moderated by Mr. Marco Aleman from WIPO. All panelists were representatives from industry, namely Ms. Belinda Gascoyne (IBM), Mr. Zhixiang Liang (Baidu), Mr. Toshimoto Mitomo (Sony) and Beat Weibel (Siemens). From an epi perspective, this panel was naturally the most interesting one. The discussion touched upon the referral G1/19 which deals with computer-implemented simulations but may have a farther reaching effect on AI-related inventions since AI can be interpreted as a simulation of the human brain. Although computer-implemented simulations of technical systems have been considered to be patentable in the past by the EPO, “things are up in the air again” because of this referral. It was discussed that inventions nowadays are already made by AI systems. As an example, a chassis for a car developed by AI of Siemens was shown where human engineers have difficulties in explaining why the AI came up with this particular construction. When an AI system makes an invention, the question arises who should be named as the inventor. So far, three solutions have been discussed: First, one could pretend that the inventor is the natural person under whose supervision the AI system made the invention. Second one could nominate the AI system as the inventor (but machines do not have any rights in most jurisdictions and do not care whether they are rewarded for their invention) or third one could name the legal person (i.e. the company in which the invention was made) as the inventor (i.e. expansion of the inventor term from a natural person to a legal person). Indicating the “wrong” inventor can have severe consequences in many jurisdictions. For example, in the USA, this could be considered as a fraud to the patent office and as a consequence the patent becomes unenforceable. Other questions which were discussed: Who should be considered liable if an AI system infringes a patent? Do we need other patentability criteria if an invention is made using an AI system? For example, who should be considered as the skilled person? Are the patent systems fast enough to respond to the speed of innovation in the AI field? Examination Guidelines of IPOs; are they coherent, or is there a need for international convergence? A video summary of the main statements of the Patent Panel can be found here.

The third panel, Governance and Development Panel, dealt with the socio-economic and ethical impacts of AI on the IP System. After lunch break, WIPO Secretariat gave a presentation on WIPO AI tools and showed video messages on IP and AI, some of which can be found here.

The fourth panel, Copyright Panel, discussed the question whether AI will change human creativity and its protection as Copyright and Related Rights.

The fifth panel, Data Panel, discussed the relationship between Data Policy and AI.

The sixth panel, IPO Administration Panel, debated on the question what the impact of AI on examination of IP applications is. Mr. Francis Gurry closed the conference by thanking all panelists and the audience for their attendance and contribution. He explained that this conference, which was intendedly quite general and high-level, conforms the basis of a more detailed and structured discussion. WIPO will issue a list of questions by November 2019 and invite everyone for comments by the end of the year, which will be an opportunity for epi to participate in the discussion and provide further input. Based on this, a second open discussion is planned for April/May 2020.